The years-long fight in the US Legislature to secure funding for veterans harmed by exposure to toxic substances finally ended in 2022 with the signing of the PACT Act. The bipartisan action delivers on the Biden Administration’s promise to address the issue of toxic exposures and their ongoing impacts on veterans. The issue hits home for the president whose own son died of brain cancer, possibly linked to burn pit exposure during his term in Iraq.

Many veterans may be wondering, what is the PACT Act and how does it impact veterans and active service members in the U.S. now that’s been signed into action? 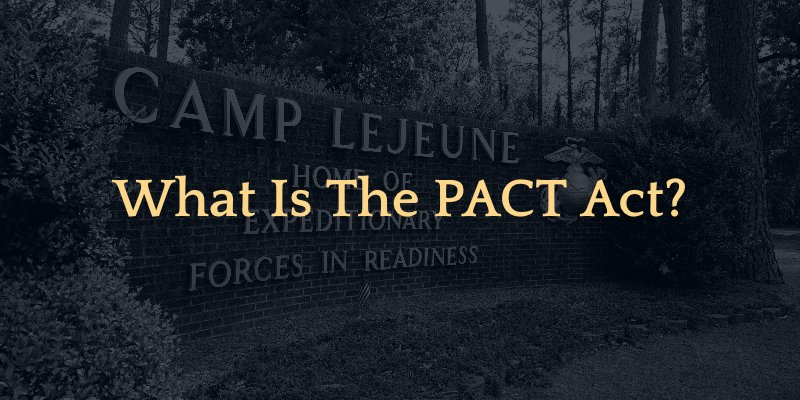 One of the most critical components of the PACT Act is its expansion of presumptive conditions for toxic exposures.

What Are Presumptive Conditions?

VA disability ratings are contingent on a veteran’s ability to prove a connection between a disability and their time in the service. Some conditions require a great deal of investigation and paperwork to prove a connection. On the other hand, a presumptive condition is one that’s automatically recognized as connected to a veteran’s service and requires no investigation or proof that their service caused the condition.

The PACT Act added many conditions related to burn pit exposure to the VA’s list of presumptive conditions including the following:

Many non-cancer illnesses also qualify as presumptive conditions under the PACT Act including:

The PACT Act and Justice for Camp Lejeune

The PACT Act’s expansion to the list of presumptive illnesses also greatly impacts veterans exposed to the toxic water at Marine Corps Base Camp Lejeune in North Carolina. Veterans and their families stationed at the camp between 1953 and 1987 drank, cooked, and washed in dangerously contaminated water, now shown to cause many forms of cancer and neurological diseases in those exposed for 30 days or more. Together with the Justice for Camp Lejeune Act, which now allows veterans to make claims outside of North Carolina’s 3-year statute of limitations, veterans are finally able to achieve compensation and justice. Our Camp Lejeune water contamination attorneys work with Missouri and Arizona residents to understand their unique cases.

The presumptive illnesses associated with Camp Lejeune include:

Veterans who’ve suffered from any of these presumptive illnesses automatically qualify for healthcare and financial compensation.

More Benefits of the PACT Act

The PACT Act of 2022 expands the list of presumptive exposure locations for Agent Orange for Vietnam veterans. It also expands enrollment periods, improves research, increases outreach and education programs, and provides testing for toxic exposure to all veterans. A skilled lawyer can help you understand your rights and benefits under the PACT Act of 2022.