There are many military veterans and active-duty military personnel living in Missouri who once trained, lived, and worked at Marine Corps Base Camp Lejeune in North Carolina. The over 220-mile perimeter of beaches and close proximity to two major ports makes the camp the ideal location for amphibious assault training and deployment. Nearly a million military personnel have spent time at the the base which includes 48 tactical training zones, 80 live-fire ranges, and 3 cutting-edge training centers. But for those who spent time stationed at beautiful Camp Lejeune in the decades between 1953 and 1987, the water they drank, bathed in, and cooked with was highly toxic from leaked volatile organic compounds in the form of deadly solvents. These toxins have been linked to serious forms of cancer and neurological diseases.

If you or a loved one spent time at Marine Corps Base Camp Lejeune, a new legislative act makes you eligible for long-overdue benefits and compensation. Call Missouri water contamination lawyers at Knapp & Roberts so we can work diligently on filing your claim as quickly as possible and in a way that maximizes your compensation.

How Can a Missouri Camp Lejeune Water Contamination Attorney Help?

Filing for medical benefits and financial compensation with a Camp Lejeune water contamination claim is a complex process. An experienced attorney like those at Knapp & Roberts of Missouri understands that it pays to be diligent and meticulous with every detail of filing a claim in order to maximize the compensation you’re entitled to and ensure the fastest possible results for your claim. We can also help appeal a claim denial or advocate strongly for your rights with potential legal action.

As Missouri Camp Lejeune Water Attorneys, we will help you obtain the maximum in benefits and compensation for your medical expenses, lost wages, and pain and suffering. The individual settlements depend on the severity of the illness you or your loved one suffered and the length of time spent at Camp Lejeune. We will also do our best to push our client’s claims forward for fast and maximized settlement payouts based on likely outcomes should each case go to trial. 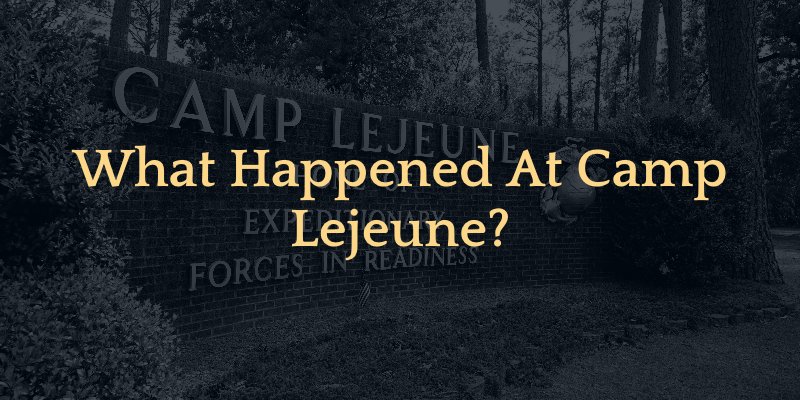 The History of Camp Lejeune

Marine Corps Base Camp Lejeune began as a beautiful portion of the Atlantic seaboard in North Carolina bordered by sand pine forests and a tobacco farm. In 1941, the 1st Marine division chose the area to set up a camp for amphibious training after the US Department of the Navy purchased 110,000 acres of beaches, bays, and forest, and Congress allotted over 14 million dollars for the construction of a base and training facilities. The extensive base’s layout and design were set in place by Lieutenant Colonel William P.T. Hill and Brigadier General Seth Williams. Land clearing began in 1941 for what was then called the base at New River and temporary quarters were set up in two farmhouses.

In 1942, the pace of the massive construction increased with the US involvement in World War II. The base was officially named Camp Lejeune after one of the earliest proponents of amphibious assault missions, the Cajun Louisiana native, Major General John Archer Lejeune, the 13th Commandant of the Marine Corp. Lejeune was a 40-year veteran, and commander of the 2nd Division during World War I.

Despite his age and retirement, Lejeune volunteered to serve again in World War II, but his advanced age prevented him from rejoining. Instead, his daughter and grandson enlisted and Lejeune was advanced to retired Lieutenant General in 1942 when the Marine Corps Base Camp in North Carolina honored him by taking his name for their new base.

Camp Lejeune trained men and women for combat in the following wars:

The camp also trains noncombatants for peacekeeping and evacuation missions as well as training for the tactical recovery of aircraft and drug interdiction missions. Lejeune is the most complete and advanced Marine Corps training base ever built and trained thousands of Marines before, during, and after the decades during which the water became contaminated through improper management and disposal of chemical waste on the base.

What Was in the Water at Camp Lejeune?

When the EPA set out new regulations for water treatment facilities in 1980, it required lab testing of the water at Camp Lejeune and other military facilities. Tests from both water treatment systems at the camp revealed astoundingly high levels of several toxins including cancer-causing Trichloroethylene (TCE) and Perchlorethylene (PCE), as well as Benzene and Vinyl Chloride. TCE and PCE are organic solvents and the levels found in the water at Camp Lejeune was a terrifying 3,000 times the concentration considered safe for humans. The toxins came from improper disposal of chemical waste from a dry-cleaning business on the base and several leaking chemical storage tanks underground used for chemical disposal from the base facilities themselves.

The officials at Camp Lejeune took no immediate steps to address the situation. A year later, a second set of tests from an independent lab revealed similar astonishing results, prompting the Lejeune officials to close only a single well located near a rifle range.

The locations in and around the base known to have water from both contaminated water systems include:

The military continued to downplay and coverup the dangerous situation at the camp until 1989 when the EPA declared Camp Lejeune a Toxic Superfund Cleanup Site, a designation that allows for intensive environmental cleanup measures.

What Diseases Can Result From Exposure to Camp Lejeune’s Water?

According to the CDC, the negative health impacts of exposure to any toxic chemical depend on multiple factors such as the following:

With these in mind, researchers determined that those at greatest risk in Camp Lejeune during the decades between the 1950s and 1980s were those with 30 or more days of exposure. Strong evidence, including comparison studies with other occupations exposing workers to PCE, TCE, Vinyl Chloride, and Benzene link these chemicals to many serious illnesses. The diseases this evidence links to the toxic water at Camp Lejeune include the following:

In women, extended stays at Camp Lejeune of 30 days or more are also linked to miscarriage, stillbirths, female infertility, and birth defects including the following:

Veterans, personnel, and their families have long fought for justice for the suffering they’ve experienced from exposure to the water at camp Lejeune. Thanks to Justice for Camp Lejeune and the PACT Act, these families are finally able to gain the justice and financial compensation they deserve.

While some of these conditions require more extensive evidence of a direct link to Camp Lejeune, 8 conditions qualify automatically as presumptively caused by the chemicals in Camp Lejuene’s water for those who served there for 30 days or more:

Under the 2022 PACT act, these conditions automatically qualify sufferers for VA benefits, including treatment by top specialists, disability benefits, and other medical care benefits and financial compensation.

In some cases, the spouse and children of veterans impacted by the toxic water at the camp may also qualify for healthcare cost reimbursement if they lived or worked at Camp Lejeune for more than 30 days and have one of the qualifying illnesses.

What is the Pact Act and Justice for Camp Lejeune?

During their time in service to the United States, many service members were exposed to dangerous toxins from burn pits, radiation, environmental toxins, herbicides, and chemicals like Agent Orange. We now know servicemen and their families also endured exposure to highly toxic water at Marine Corps Base Camp Lejeune.

As the result of a bipartisan effort under the Biden administration—inspired by Biden’s late son whose brain cancer may have been caused by burn pit exposure in Iraq—congress passed the largest expansion of healthcare benefits in VA history, the PACT Act. This act honors Sergeant First Class Heath Robinson, who died from toxic exposure in 2020. Congress signed the Promise to Address Comprehensive Toxins or PACT Act into law on August 10, 2022.

The act not only streamlines the process for making a claim and expands the number of presumptive conditions related to toxins, but it also improves the presumption process, including 23 new conditions presumed to link to toxic exposures.

Justice for Camp Lejeune is part of the PACT act focusing on veterans who were exposed to contaminated water at Camp Lejeune. It provides a pathway for justice for those victims who previously were denied justice due to North Carolina’s 3-year statute of limitations which formerly prevented cases from moving forward. It also removes the Feres Doctrine which prevented victims from suing the military if they developed illnesses while on duty.

What Compensation is Available for a Claim?

For decades veterans and family members suffered from a variety of deadly cancers and other illnesses. Leukemia and Non-Hodgkin’s Lymphoma as well as Parkinson’s Disease and birth defects are among the most common illnesses linked to the toxic water at Camp Lejeune. By contacting our Missouri Law Firm today, we can efficiently file your claim for the maximum benefits and compensation you deserve under the new PACT ACT legislation. Our Missouri lawyers specialize in Camp Lejeune water contamination cases, and can fight for your compensation. You could receive the following:

If you suffer an illness or cancer and lived or worked at Camp Lejeune between August 1953 and December 1987 for at least 30 cumulative days and didn’t leave the military with a dishonorable discount, you are eligible to file a claim. Contact our Missouri Camp Lejeune water contamination attorneys today so we can be your advocate for long-overdue justice and care.

Is It Too Late to File a Claim?

The Justice for Camp Lejeune act allows up to 2 years from the act’s enactment date to file a claim. This means victims of illnesses related to their time at the camp have until August 10, 2024, to file their claims. Victims filed thousands of claims under the Camp Lejeune Justice Act in the first month alone. Government lawyers are currently increasing their staff to handle the large volumes of individual claims still to come. 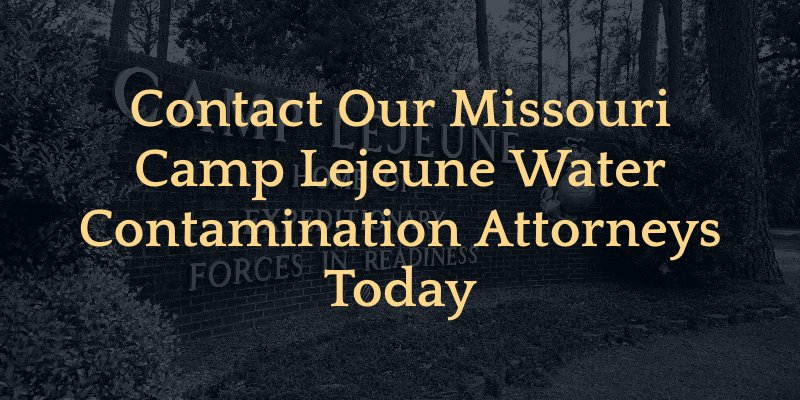 Knapp & Roberts is a team of highly skilled and experienced trial lawyers with compassion for victims who eventually suffered grave illnesses from their service duty time and training at Camp Lejeune and exposure to the toxic water at the camp.

Contact our team today if you or a family member served, lived, or worked at Marine Base Corps Camp Lejeune between 1953 and 1987 for 30 or more days and experienced cancer or other serious illnesses. Family members and dependents of deceased veterans also qualify for compensation.

At Knapp & Roberts, we will evaluate your claim to see if you are among the thousands entitled to compensation and long-overdue justice for your injury. We will fight aggressively for maximum compensation for your losses.