Water is a basic requirement for human life. We often take for granted that the water we drink, wash, clean, and cook with is clean, clear, safe, and life-giving. Unfortunately, it’s not always so. For veterans, active military personnel, and civilians in Arizona who were stationed or living in Camp Lejeune near Jacksonville North Carolina at any time between 1953 and 1987, the water they drank and washed with was highly toxic and in many cases, had long-lasting ill effects including cancer, birth defects, and deadly diseases. Now, thanks to the federal PACT act and Justice for Camp Lejeune, government officials can no longer ignore the problem and thousands of families are finally achieving justice for years of suffering and loss.

If you or a loved one spent at least 30 cumulative days at Marine Base Camp Lejuene at any time between 1953 and 1987, it’s likely that a toxic exposure compromised your health or that of your loved one. Contact the top-rated team of trial lawyers at Knapp and Rogers in Phoenix, for help filing your claim with a keen strategy for getting the maximum compensation in as timely a manner as possible. 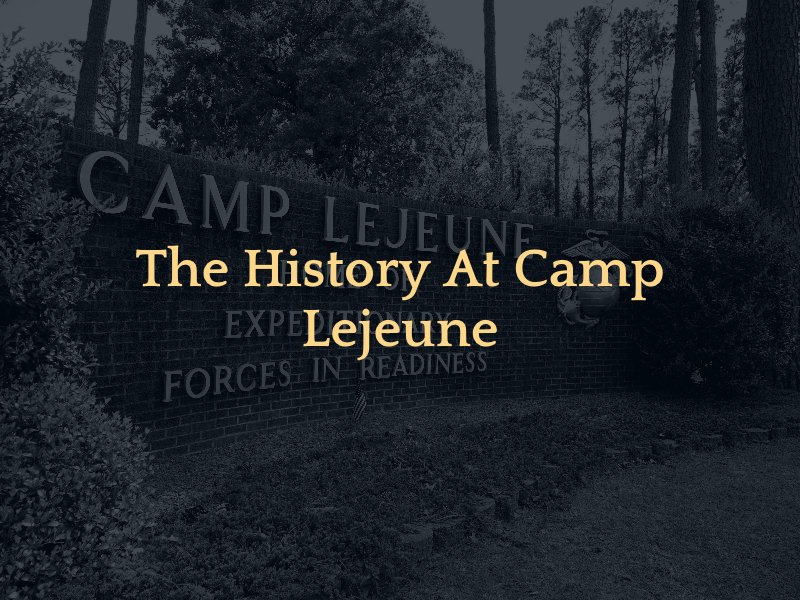 The federal government’s Department of the Navy began construction on Camp Lejeune Marine Corps Base during World War II after recognizing the ideal logistics of the 110,000-acre property with a 224-mile perimeter including beaches and bays for amphibious operations training and close access to ports in Wilmington and Morehead City for deployment. Construction went into high speed after the Pearl Harbor attack and the facility began training military personnel and housing their families during the war, soon becoming the top choice for training due to the private beaches, golf courses, movie theaters, and a thriving bird sanctuary. In 1942, the facility received the name U.S. Marine Barracks Camp Lejeune in honor of the commanding general of the Second Army Division, Major General John Lejeune after his death.

Besides multiple barracks and training facilities, the base included a hospital and several housing communities for family members who enjoyed the idyllic location surrounded by recreational beaches. Most military personnel and their family members believed the camp was one of the most desirable locations for active-duty military members to train, live, and work. Unfortunately, they had no idea that each day they spent at the camp and its surrounding housing communities increased their risk of serious illnesses in the future.

What Went Wrong at Camp Lejeune

In the early 1970s, a base order set regulations for the safe disposal of chemicals including solvents. The order warned that the chemicals could contaminate the water systems. However, officials continued to dump waste materials into aging, leaky underground storage tanks.

In the fall of 1980, new regulations put in place by the Environmental Protection Agency (EPA) required testing to begin at the water facilities supplying water to the camp and housing communities. Tests revealed shockingly high levels of dangerous volatile organic chemicals in the water system at the base’s Hadnot Point water treatment system. Later investigations strongly suggest the toxins, Trichloroethylene (TCE) and Perchloroethylene (PCE) came from a nearby dry cleaning business that opened in the 1950s and used improper disposal methods for organic industrial solvents. Original copies of the test results reveal hand-written notes marked, “SOLVENTS!!!” and “Danger!”

The base took no steps to correct the situation. The following year, tests at the second water treatment facility at Terrawa Terrace showed similar findings, this time linked to leaking underground storage tanks for chemical waste products from the base itself. These findings prompted the military management at the base to close only a single well. Continued prompting for action resulted in demands for a second series of tests by Grainger Laboratories at both water system sites. The stunning results of the Grainger tests showed levels of both dangerously toxic solvents at 3,000 times the concentration considered safe for human consumption.

In 1989, the EPA designated Camp Lejeune and the surrounding area a Toxic Superfund Site, a designation that allows the agency to spend money on rigorous cleanup methods for highly contaminated toxic sites.

The known carcinogens as well as frighteningly high levels of benzene and vinyl chloride had likely been contaminating the drinking water in the following areas of the camp and nearby housing communities for decades:

According to an investigation by the Congressional Oversight Committee in 2010, both Marine and Navy officials were aware of the water contamination, and instead of being forthcoming, immediately working on correcting the problem, or offering compensation and medical care to exposed personnel, they covered it up for several decades.

If you or a family member served, worked, or lived in any of the affected areas for more than 30 days between 1953 and 1987, and suffered cancer or other serious illnesses, you may be eligible for compensation and damages through the PACT act which states that specific conditions are now considered presumptively linked to the water at Camp Lejeune. This means you no longer have to prove a link in order to qualify for benefits and compensation for your suffering. The PACT act legislation provides over 6.7 billion dollars in federal funding for veterans who trained, lived, and worked at Camp Lejuene and now suffer from debilitating health conditions and deadly cancers. 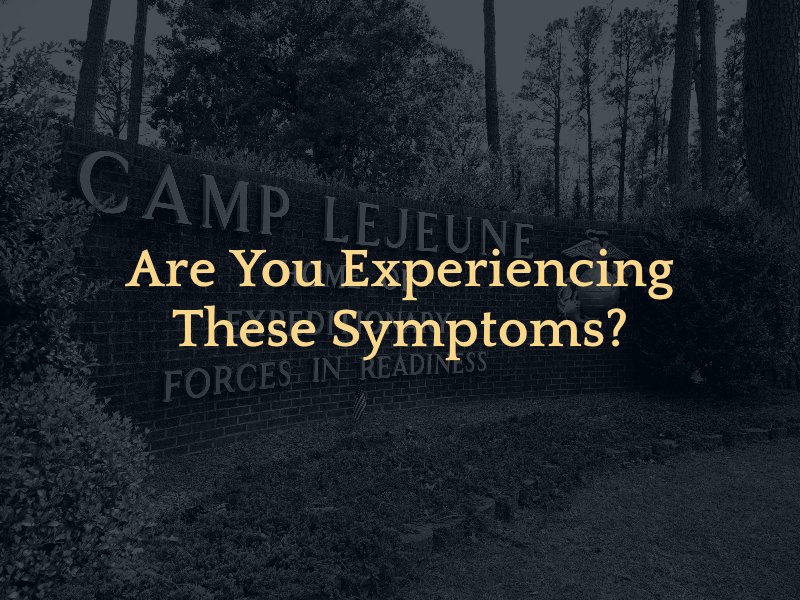 The organic solvents found in the water at the Marine Base Corp Camp Lejeune are highly toxic substances. TCE is a known carcinogen linked to many types of cancer and PCE has a highly-likely carcinogen classification with known negative impacts on the human nervous system. A single study found the Marines who served at Camp Lejeune between 1975 and 1985 had a 10-percent higher than average risk of dying from cancer compared to Marines who’d served at other bases including Camp Pendleton in the same time period. This number likely under-represents the number of people, including civilian family members, negatively affected by the toxins. Many types of cancer have strong links to the chemicals found in Camp Lejeune’s water for decades including but not limited to the following:

Leukemia and Non-Hodkin’s Lymphoma are the most common cancers suffered by those stationed or living at Camp Lejeune during the time period of the contamination, but all of the above as well as other serious medical conditions may also have a link to the toxic exposure. If you or a family membered suffered any serious medical condition and spent time at Camp Lejeune, contact the Phoenix office of Knapp and Roberts, specializing in life-changing injuries and wrongful death cases, for a free consultation. No one should have to go through this alone now that the truth about the matter is no longer hidden in the shadows. Our team is highly qualified to navigate the complexities of Camp Lejeune water contamination claims to ensure the best outcome for your case.

What is the PACT ACT and Justice for Camp Lejeune?

In 2022, the Biden Administration signed into law a new act called the Promise to Address Comprehensive Toxins act or PACT act. Inspired by the president’s son, Beau Biden, whose terminal brain cancer was likely linked to toxic chemical exposure from burn pits during his military action, the administration sought to make it easier for active duty military, their families, and veterans to gain medical benefits and compensation for diseases presumptively linked to their exposure to toxins while on active duty. By expanding the number of conditions known to be linked to toxins, these victims and their families can get help and compensation with far less effort and time.

Justice for Camp Lejeune targets the water toxin exposure specifically and allows the right to file lawsuits previously denied to sufferers by North Carolina’s 6-year Statute of Repose which formerly prevented sick people from filing claims. By the time exposed military personnel and civilians who lived and worked on the base developed cancer and other illnesses — something that often takes years after exposure to develop — the statute prevented them from filing.

If you were affected by toxic water at Camp Lejeune or if you lost a loved one to cancer or other serious illness, and they lived or worked at the camp, you can contact an attorney today and file a claim. Our skilled Arizona lawyers specialize in Camp Lejeune water contamination cases, and ready to fight for your rights and long-awaited justice.

What Qualifications Are Needed for a Claim Under the PACT ACT?

In order to file your claim, you only need to provide records proving that you or your family member spent 30 cumulative days or more at Camp Lejeune, the housing communities, hospital, or nearby MCAS New River helicopter training base and airfield in Jacksonville, North Carolina. If you were there for any period of 30 days or more between August 1st, 1931, and December 31st of 1987 and separated from the military in good standing without a dishonorable discharge, you or your loved one qualifies for medical benefits and compensation. The Arizona Camp Lejeune water contamination attorneys at Knapp and Roberts can help prepare your Camp Lejeune water contamination claim with diligence and efficiency with the following documents:

The claims process can be complex and confusing and there is a time limit to get a claim filed accurately and processed. Let our law firm do the hard work for you to ensure the maximum financial compensation for your claim.

What Compensation and Damages Are Available for Victims of Camp Lejeune’s Contaminated Water?

Your claim will not only finally bring you or your loved one the justice they deserve, but also financial compensation and damages in amounts depending upon your VA disability rating including:

It took over 30 years after shutting down the wells at Marine Corps Base Camp Lejeune for the VA to finally begin processing the long-overdue claims of those hurt by exposure to high concentrations of toxins in the water they and their families drank and bathed in. 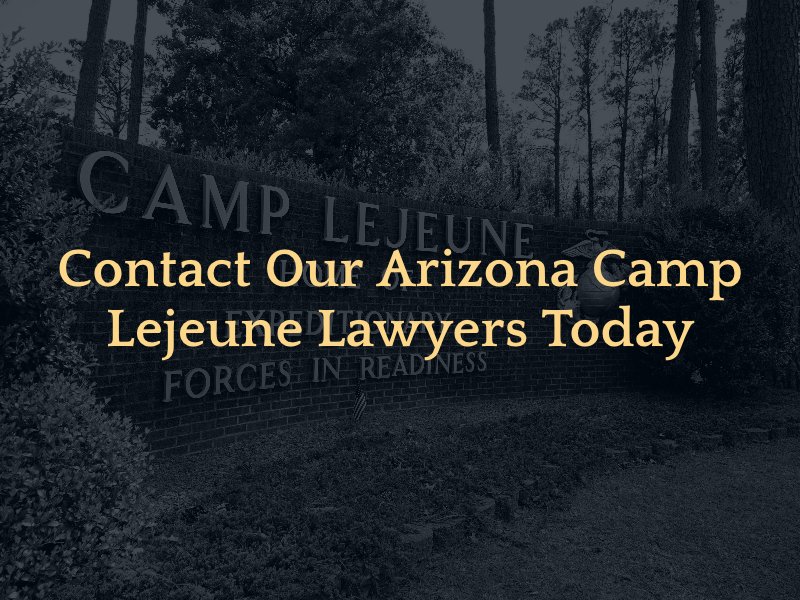 There isn’t unlimited time to file your claim. If you currently live in Arizona but once spent time at Camp Lejeune, it’s critical that you contact the compassionate legal team at the Phoenix office of Knapp and Roberts as soon as possible so we can evaluate your case and begin working aggressively on your claim.