How Much is Your Camp Lejeune Water Contamination Case Worth?
October 15, 2022

For decades, the drinking water at Marine Corps Base Camp Lejeune was contaminated with shockingly high concentrations of toxic Volatile Organic Compounds (VOCs’) from solvents and other chemicals improperly stored in leaking underground tanks. These contaminants came from both a dry-cleaning business and from military facilities operating on the base. Leaking toxins seeped into the two major water systems supplying the camp and surrounding housing communities with the water they drank, cooked, and bathed with daily. Officials at the camp did little to address the situation and covered up the severity of the contamination until EPA testing declared the camp a “Superfund Site” for high-priority clean-up procedures in 1989.

Thanks to the bipartisan passage of the Promises to Address Comprehensive Toxins (PACT) Act in 2022, with the inclusion of the Camp Lejeune Justice Act, victims of the toxins in the water at Camp Lejeune can finally file claims for compensation for the medical costs, lost wages, and pain and suffering they or their family member endured for many years.

Who Can File A Camp Lejeune Claim?

Victims or their surviving family members who spent at least 30 days serving, working, or living at North Carolina’s Camp Lejeune between 1953 and 1987 and who suffered a serious illness, cancer, or birth defect connected to the contaminated water can now pursue the compensation and justice they deserve. As part of the PACT Act, veterans who qualify can gain expanded benefits including medical care, appointments with top specialists, and in some cases, disability benefits. While prior to the passage of the PACT Act, veterans had to provide substantial evidence linking their illness to the military, now an expanded list of medical conditions qualify as “presumptively” caused by exposure to toxins during military service. For victims of Camp Lejeune, this list of presumptive conditions includes the following:

Veterans, guardsmen, and reservists with any of these conditions who spent time at Camp Lejeune now qualify for expanded medical benefits without the burden of proving causation. Plus, they also qualify for a claim for compensation and damages.

Veterans and family members with other conditions, and who don’t qualify for VA benefits, may still file claims for medical expenses, lost wages, and pain and suffering. These claims are separate from VA benefits. 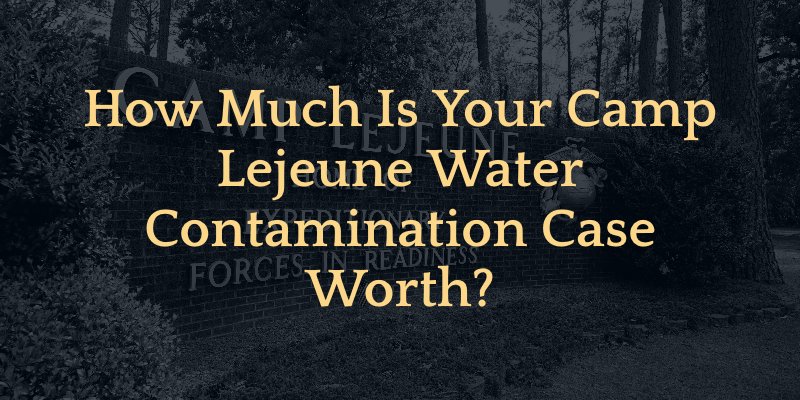 What is a Camp Lejeune Contamination Claim Worth?

While each case is unique, and compensation depends on the severity of the illness and the amount of time spent at Camp Lejeune, many claimants have a strong case for substantial compensation. The Congressional Budget Office projected expenditures of over 6.1 billion dollars to Camp Lejeune victims over the next decade.

Potential claim settlement amounts will likely include the following:

A skilled Camp Lejeune water contamination lawyer in Arizona or Missouri is qualified and experienced in this area of law can evaluate your own unique claim, and do their due diligence in a timely, correctly filed claim to maximize your payout amount. Let your attorney advise you on what kind of compensation you can expect based on projected awards should your claim go to court.